Home » My Dad Went to Prison Like Teresa Giudice

This article was originally published in Yahoo Parenting and is presented here in its entirety without any edits, except the removal of links to other Yahoo Parenting stories.  The original story is here. 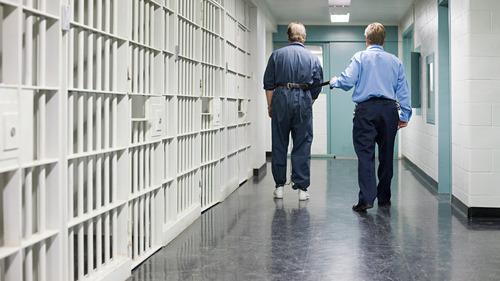 When the judge sentenced my father to prison in 2013, I remember him being led away by a sheriff’s officer, his back to me, going through a door – then gone.

Teresa Giudice of Bravo’s Real Housewives of New Jersey started her 15-month sentence at Danbury, a Federal Correctional Institution in Connecticut, on Monday — leaving behind four young daughters, the oldest, Gia, publicly taking it the hardest.  According to People.com the 13-year-old, who credits her mom as her best friend on social media, tweeted, “can’t sleep, to (sic) much on my mind,” followed by a nervous face and gun emojis. The tweet has apparently since been taken down.

Like Gia, my dad — an ex-attorney who was once a municipal court prosecutor — went to prison for a non-violent, white-collar crime after taking a plea deal, admitting he was guilty to two counts of second-degree “failure to make proper disposition” to his clients from his trust account. He was disbarred and can no longer practice law.

Unlike Teresa’s family, my two siblings and I were all adults when our dad entered jail. I had a kid, age 5, of my own. But, being 32 years old didn’t make it any easier. The days leading up to his sentencing can only be described as a balloon stretching bigger, bigger, bigger — all that pressure just expanding inside. Pop.

After he was taken away behind that courthouse door, I learned an officer said to another, “Is this one for the bird cage?” Translation: Is he going to have a nervous breakdown? I wondered the same thing.  The days came and went, my father spending his time in county jail, then transferring on a bus to a processing/classifying state facility, and finally ending up at a New Jersey State Prison. 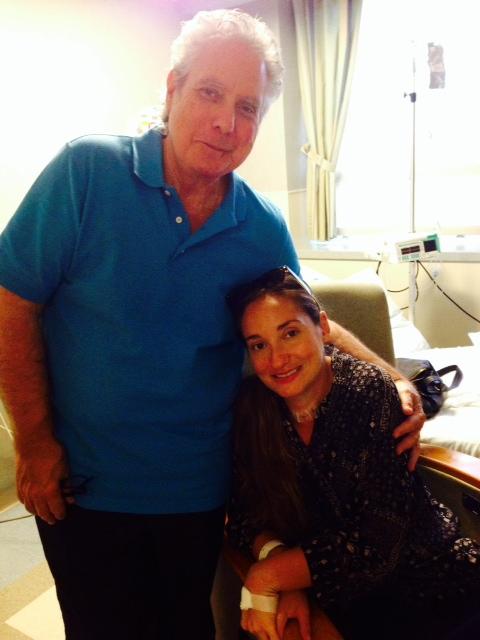 I was doing what I normally did. I took my child to daycare, went to work, played Legos, hung out with friends. Close friends supported me. They brought food, wine, and offered to babysit. You carry on publicly, because you have to, but life stops on the inside. You become the incarcerated person’s touchstone. You are their connection to freedom. The phone would ring: “Someone from a correctional institution is attempting to call you, press 8 to accept.” My dad liked to ask me what I ate for dinner and I always felt bad telling him because I knew he was eating sh-t, like a “moist bean burrito” or a salad that consisted of a handful of shredded lettuce, but he would badger me until I said: TACOS.

Everything he told me was strange and fascinating at the same time. (It didn’t hurt that I was simultaneously binge watching season one of Orange Is The New Black on Netflix — and had communicated with Piper Kerman, for whom the series is based on.)

Dad got a bottom bunk and a locker ­— and a bunkie who talked to himself. Because he got there on Easter weekend, he wasn’t able to get a toothbrush or other essentials, but an inmate shared with him. But when my dad’s commissary came in, he had to pay it back double — the rules, of course. An inmate threw a chair at him — dad threw it back harder. Once he found a package of chili in his laundry bag – unbeknownst to him, he was the middleman and was supposed to give it to someone else. This angered my dad because he didn’t want any trouble.

After you eat (or don’t) it’s tradition to knock on the table once before you get up — my father refused to knock, or get in the routine. Some inmates called him “OG” for “Old Gangsta,” a sign of respect. Twenty-something correction officers called him “Old F—k” when my dad passed them silently following their directions. An inmate who went by the name “Fist” looked out for my dad. There were times when inmates ordered pizza and sandwiches via their commissary from the local pizza joint — turning the jail into a literal pizza party. Once, “Fist” gave my dad a fried fish sandwich with mayo — rumored to be from the correction officers’ kitchen — how he got it, who knows. It’s an entire different civilization in there.

I visited my dad — always without my young son — on Saturday or Sunday. Teresa Giudice reportedly told her two youngest daughters a fib about her whereabouts for the next year-ish, and I chose to do the same with my unassuming 5-year-old. My dad went to a rehab to get stronger since he wasn’t feeling good. I let my son talk to him on the phone and send him homemade cards with glitter glue. One day, I’ll tell my son the truth. Teresa and I didn’t lie. We protected our kids’ innocence. Let our babies run barefoot in the grass, blow bubbles, slurp spaghetti, and have circle time at school. My kid’s main focus in the time my dad was away was learning to read and Little League. 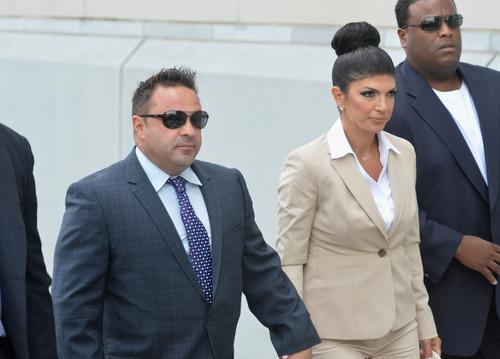 Visiting wasn’t easy and it killed an entire day, leaving me physically and emotionally drained by nightfall, but jumping right back into my role as single mommy. It was a 3-hour drive to the prison and I watched the seasons change through the windshield as I sipped iced coffee. Barren branches at the end of winter, white buds came in spring, lush greenery everywhere, and street-side farmers markets in the summer. (If I was running early and knew I’d end up being screamed at from the tower — “YOU CAN’T PARK THERE” as I entered the prison’s parking lot — I would stop and buy fruit or have a Blue Moon at this little dive bar five minutes from the facility. I became friends with the bartender. He knew where I was going.)

Once I arrived, I stood in line with strangers, sometimes in the rain or beating sun. After being ID’ed, I got a secret stamp visible only with a black light. Next I walked through a metal detector, was searched, and patted down. I handed over my keys, then walked down a short hallway. A metal door slid open and I entered with a bunch of other visitors. The metal door closed. (This wasn’t an elevator. It’s just a space.) Then the metal door to the visiting room opened. It was bright. I handed over a form noting my dad’s name and inmate number and the corrections officer flashed a light on my hand ensuring I was stamped. There were yellow and orange chairs and I always made a point of making sure the one my dad sat in didn’t wobble (most of them did).

Next, I would buy my dad spring water from a soda machine advertising Coke that only carried water. (This was hilarious to me because my dad loves Coke — but he was in jail, not a country club.) Then I just waited for the guard to call down the inmates. In that time my eyes darted around the room. A dusty chalkboard scribbled with “Word of the day: Inspiration.” A sign peeling from the wall: JAIL: THE WORST FOUR LETTER WORD. A table with tattered children’s books for the kids that came to visit.

I always grew antsy waiting for visiting to actually start — it took at least 45-minutes in that room before I saw my dad. I was locked in there with two bottles of water and my license. I was in jail. And even though I got to leave, it resonated that someone else was controlling me. I couldn’t just get up, open the door and decide I didn’t want to stay. “You’re told when to sleep, eat, shower,” my dad told me.

Finally, a buzzer would sound and the doors would open. Inmates in tan would flood the entryway. I always smiled bright and yelled “Hi dad!” even though this was an incredibly hard moment for me. My dad lost a lot of weight, his hair grew long and wavy, he had dark circles under his eyes, and broken blood vessels on his face. He wasn’t admitted with the best health — and it only worsened with the limited healthcare available at the jail.

Hugging was very important. My dad always hugged me for a long time and I felt his bones — wasting away, he was. He always smelled like soap. He held my hands the entire visit and they were cold even on hot days. We just sat face-to-face and talked for an hour’s time. There was no food, martini to order, photos to show or jokes to crack. The time passed so quickly, and sometimes so slow.

When we had just five minutes left as signaled by a guard, visitors had to move to the front of the room and find new seats. The inmates were lined up against the back wall. I would smile, wave, watch him walk away, his back to me, through the door until I couldn’t see him anymore. Then I’d sit there for another 40 or so minutes while the inmates were stripped and searched, making sure no one snuck them something: drugs, gum, a bobby pin — who knows. On the way home, I opened all the windows in my Jeep and held my arm out the window — freedom is a beautiful thing.

I thought about my father every single day he was away. Soon it became like anything else. You get used to it. We always had a strong relationship and it only grew stronger. My father was released in the fall of that same year — serving only seven months of his 3-year-sentence — home in time for Thanksgiving 2013. The view through the windshield had changed again — to a collage of orange, red and yellow. The first snowfall hadn’t touched the grass yet. It was all temporary.

When Gia Giudice woke up Monday, her mom was gone and I knew how she felt. Helpless. Scared. Mad. Even a little happy her mom had entered prison because it meant the countdown was on for her to come home.

My father and Teresa are convicted felons forever. They both made terrible mistakes and they were punished for them. For Gia and me, their entry into the system was the beginning of the end of circumstances that changed our families forever. I am not ignorant or numb to the fact my dad did something punishable by the law. I have empathy for the people who were affected by his actions — actions he admitted were “horrendous.”

As a parent myself, I know my kid sees me as a flawless superhero. We’re all human and capable of things that don’t show our true character, but fault and discolor us. At the Giudice sentencing in October, Judge Salas told Teresa’s husband, Joe,  “What you did in this case doesn’t define you as a man … You have a lot to live for.” I believe the same about my dad.

People will always have an opinion when it comes to what happened to my family in 2013 — just like the endless string of social media comments about Teresa. Some people are supportive and even-toned, while others are disgusted and horrified. But a judge, the highest power in this matter, found a resolution for my father that included incarceration and restitution payments. Not part of the sentence: The suffering my father endured and the emotional and mental havoc that shook up my life and others closely involved. And now it’s over. Exhale. I put this behind me. Gia will too. It’s all you can do.